July Layouts – One in a Melon Paper Pumpkin

Did a little weeding in the raspberry patch today and it's depressing.  I've got gorgeous berries and they are 50% bad.  There is a newer bug out there called SWD – Spotted Wing Drosphila…basically it's a fruit fly that lays it's eggs in UNRIPE fruit.  So you think you are getting a gorgeous berry but inside it's mushy and filled with nasty little wiggling white larvae.  It's so gross!  All that work…and ugh…bugs….We attempt to do most of our gardening organically but I gave up that fight, bought the spray and have been combating the nasty little critters with a sprayer and whatever pesticide that promises complete annihilation!  I even tried putting chickens in the patch to clean up the dropped berries thus eliminating a potential source of more flies..but I don't trust the dogs around them.  They've been a little rough on the chicken count this summer and I don't want to deliberately put the girls in harms way…so now I crawl on the ground picking up the fallen fruit and throwing it into the chicken coop myself, feeling slightly guilty for feeling excited as the larvae enter the food cycle via the ravenous chickens…I've sunk to new depths…all because of a stupid little fruit fly.

Seriously though…I feel bad for commercial and home growers that are making their living from berries and fruit.  This little bugger could be a huge factor in being able to stay afloat. Google SWD…you'll be depressed too.  So I decided that I'd come in, grab some iced tea and work a little on a few piles in the office.  That's a little depressing too but at least there isn't wiggly white larvae involved.  Check this off the list…July Layout 1 & 2 – Not sure what photos I'll use but yet we do have watermelon growing out there and as of yet…I haven't heard of the stupid flies laying into that!

Thought this layout turned out cute.  Used up a few of the Paper Pumpkin leftovers from the June's One in a Melon kit.  Cute, hey?  Next Layout Class is Aug 24th.  Join Us!  It's a blast 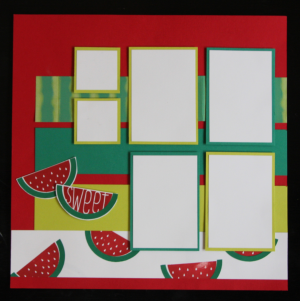 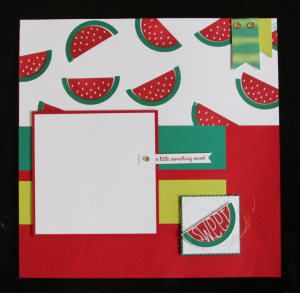