I spent a better part of the day trying to re-work my kitchen cabinets as a few of them came in a little different than the specs.  I had originally planned on having Hostess Club today but felt I needed to get this kitchen cabinet issue worked out, so my clubbers graciously allowed me to postpone club to next week.  I'm working with my poor cabinet maker to try to avoid having him remake several of them and I think we've managed to come up with an adequate workable solution without too much extra work for him but I probably looked pretty dumb standing in the kitchen for hours with a blank look on my face.  It was my "i'm thinking" face, no doubt.  I also managed to get two of LAST month's Hostess Club videos taped and one of them actually edited AND the cardstock packets ready to mail out.  I sure wish EVERY day was as productive..three loads of laundry AND supper made to boot.  Rock Star!

Here's the card from March's club 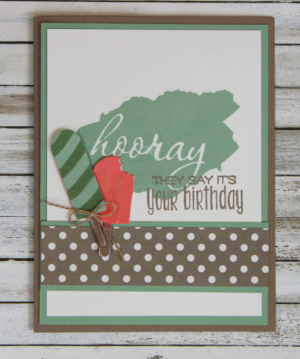 And a link to the video.  I'm off to pack for Minneapolis On Stage as I'm planning on leaving bright and early and dropping the cabinets that I can't rework and the too-big crown molding off at the cabinet makers on my way through.