Yikes, It's been two weeks since I've shared a card with you but I can tell you that I haven't been eating bon-bons and watching reruns of the bad television.  It's been Grand Central here!  I've had a full schedule of classes, helped with the class Halloween party and trick or treating (missed carving our pumpkins this year…oops), OnStage Local in Madison this past weekend, a gamut of soccer games (my UWW Warhawk's soccer team won the WIAC championship and now are moving on the the NCAA tournament), finally got Denver's senior photos take but mainly, we've gotten the entire basement addition dug and ready for concrete tomorrow.  Then it all comes to a crawl as my rough carpenters are backed up on another job.  It's all in the life of a general contractor.  🙂

So yeah…been a little busy.  A couple of weeks ago I share the photos of Rob and Denver taking off our deck.  This is what I've been working on the last few weeks. 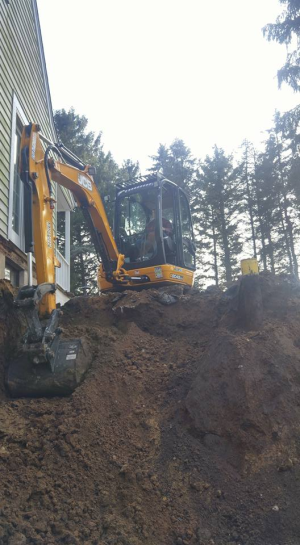 That's my dad!  He is or at least was, before he retired, an excavator.   We hired a machine and he dug my basement for me.  He did an awesome job. 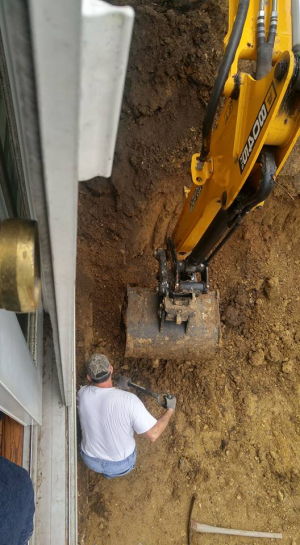 This is the view out my patio door.  Rob's helping my dad find our old water line.  We needed to have a new well dug too as it's right in the footprint of the addition.  This will be his man-cave.  Our house is pretty small, square footage wise, and I've asked him to keep all his "dead-animal" heads out of the living room and in the garage.   So, this will eventually be the place where all his deer heads go.  I asked for a kitchen, he asked for a man-cave.   Deer heads aren't really my thing hey, it's a free country and we have to compromise. 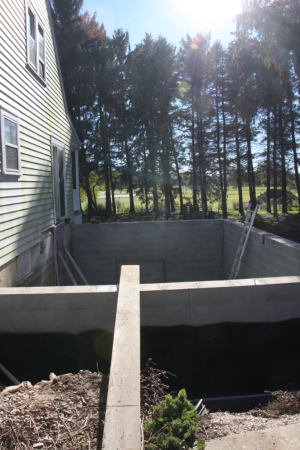 So this is the basement walls that were done this week.  It's ready for concrete tomorrow and then we can backfill and get the yard somewhat back to normal.  In the meantime the cats are having a blast walking the walls.  Good thing they have nine lives. 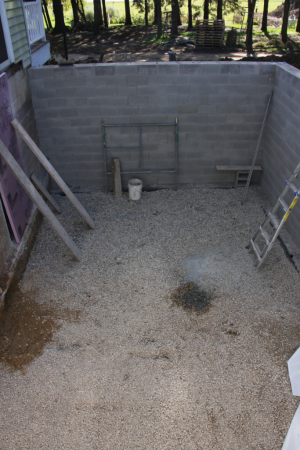 This is the basement walls to date.  Last night the well driller was here, crazy late – poor guy, cutting out the old well and dumping well-gravel down the hole to fill it.  I am women, hear me roar…I helped by hauling all the bags from his truck and dropping it from the top.  50 pound bags, thank you very much…and about 25+ of them.  The only hard part was walking the stinkin' plank…scary!

So tomorrow, it's concrete and my class.  Will have to give the ladies a heads-up.  Then we put the first floor on so it stays dry…that will eventually become my new kitchen.  All fun and games here at the Schuelers.