If you could see my hair and hands today you would know instantly what I've been doing the last few days…painting at Adria's apartment.  She will be moving into a place in August for school and the house is in great shape but just needed a fresh coat of paint.  As she's Daddy's Lil' Princess, it was decreed that 'we' would freshen up the place for her before she moved in.

Of course, I firmly believe in child labor and as such, ALL minions were required to help.  Now, the Lil' Mini Princess has more paint on herself than I do…at 9, all I trusted her to do was the closets..and without a roller.  :)  She said she felt like Vincent Van Gogh (with or without the ear?) and told me several times that one painter had to paint an entire church.  Obviously she's been listening in her art class at school.  Hip Hip Hooray for public education.

So Painter's Palette has been on our minds, figuratively and literally.  This was an adorable card that we did this past weekend at our Stamp Camp.  It used the Painter's Palette set.  I will have to say it wasn't real high on my list when it first came out but its been one of those sets that's starting to grow on me.  My hesitation probably resides in the following:  it was debuted with the Playful Palette Designer Paper and Washi.

Here's my hypothesis…because it's shown with the Playful Palette DSP which is SOOOO entirely 1980's, you will like this set depending on how you felt about that decade.  Myself, I was a gawky dorky teenager with big hair, big glasses, big zits and wearing several Izod shirts at once in the 80's.  Can you say 'awkward?'  So I have a few issues with the 80's that need to be resolved with a little or a lot of therapy.  But like many things..you need to just deal with them and work through it.  ;)  and as such, I'm starting to like this set.  I'll keep you posted.  So here's the ADORABLE card that's bringing me around to the "The 80's was Fun!" side. 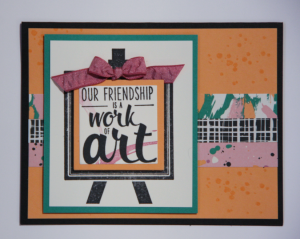