I've been chained to my computer desk the last few days as I've been slogging through the Mukwonago Boys Varsity Soccer Highlights book.  My husband offhandedly remarked the other day, that "whoever did last years did a really nice job and how was I ever going to top it?"  Yeah, probably not the best thing to say to a procrastinating puttzer.  Now the challenge has been issued.  And sadly, I'm operating in full insecure and self-doubt mode, I'm guessing and second guessing all the layout and design choices I've made.  "What if those teenage boys don't like it!"  If only a pair earmuffs would drown out those little nasty self-recriminating voices!  Seriously, in my heart I know they are going to like whatever they get but my head keeps questioning everything!   I think I need to just switch over into "hurry up and finish mode" as the deadline looms!

I also refuse to believe ANYONE that tells me digital scrapbooking is faster than traditional memory keeping!   Ok, I suppose they would have a point when they would say that making 25 copies might take me a while?  It really has been fun though and MyDigitalStudio is great for dressing up a digital layout.  Love it.  So with that being said, I'm just going to need to show you a card from this weeks Coffee, Cards and Biscotti class instead of something new and fabulous.  It will just have to be old and fabulous?  All for now, I have a costume to create and a scrapbook to work on! 🙂 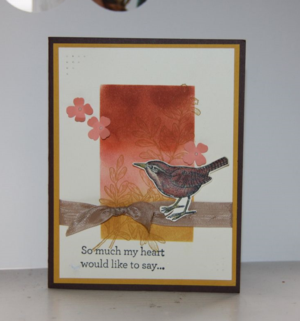 Head over to my website and order the items to make your version of the An Open Heart Card.

Note:  this technique was done my using post-it notes around the perimeter of the card to mask off the edges.