A Little Love to Warm your Heart

Are you ready for the Deep Freeze?  All my friends have been posting on Facebook how utterly ridiculous the grocery stores are this afternoon.  Apparently many of them will be closing early Monday evening, so I did feel the need to take stock.  I have two gallons of milk in the fridge, a Costco size pack of TP, and I just refilled the coffee.  I also found a box of brownie mix.  So food cache-wise, we are golden.  I just had Rob pick up a pallet of pellets for my studio stove, so that should get me through 50+ days of sub-arctic temps and I've got entire cupboard of cardstock and new stamps.  Again, I should be fine.  I did have Rob stop at the pet store this morning and pick up a litter box and a litter.  We have two outdoor kitties and while they ARE farm cats and used to being outdoors and snuggle together quite nicely, I was a little worried about them.  So we'll let them take a little vacation to the office while it's super cold.

Kids went back to school on Thursday so I've had two days in the office and had a chance to work/play out here.  Of course, they will be off on Monday due to the weather so that nixed any more plans for uber-productivity.  Sigh….maybe they will want to help with swap cards for Leadership?!  hahaha…

So, here's just a few of the cards that I had wanted to share with you yesterday.  I had my Hostess Club for January on Thursday and Friday and this is one of the cards that we did using the Love you More Stamp Set.  This set is ONLY available until Jan 27th and it's really quite adorable. 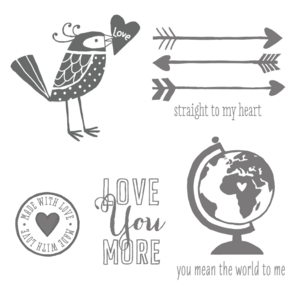 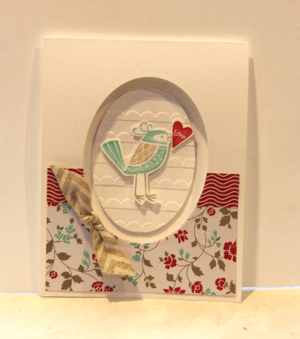 I used to do an occasional post called Fugue Friday – Variations of a Theme (should I bring that back?).  For those of you that can't remember the definition of fugue…here's the definition I copied from the  Miriam's-Webster internet dictionary.

1
a:  a musical composition in which one or two themes are repeated or imitated by successively entering voices and contrapuntally developed in a continuous interweaving of the voice parts

b:  something that resembles a fugue especially in interweaving repetitive elements

2
:  a disturbed state of consciousness in which the one affected seems to perform acts in full awareness but upon recovery cannot recollect the acts performed

I'm pretty sure that I can make a good case for either definitions.

So here's are my variations on the theme….or amnesia.  You pick. 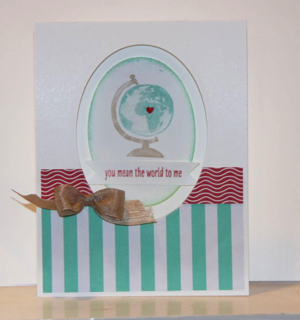 And because you just can't stop when you are inspired by a design. 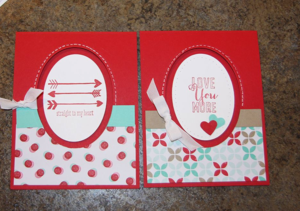 Don't forget to place your order for these adorable stamp sets before Jan 27th.