I know what I said….

Yes, I know that I mentioned that I would be home for a good long while now.  But I swear, I thought Rob was on soccer detail for this past weekend.  Apparently there are a few things that take precidence over soccer and hunting is one of them.  So, I was the one in charge….

I skipped my booth at the Farmer's Market and loaded the kids up for a soccer tournament in Schaumberg, IL.  It was Denver's team this time and the boys played well.   We had the first two games Friday night and Saturday night so that left an entire day in Chicago!  I know, the horrors of teenagers and the near proximity to the Woodfield Mall…..I made the executive decision to hit the Museum of Science and Industry instead.  Wow, that place is custom made for science geeks like me!  I'm sure they won't tell you this out loud but I know we all had fun and I probably got by with about 1/10 of the cost of a mall trip!  Yes, it was hard to resist IKEA but I didn't think it would have been fair for me to get some retail therapy while the kids had to get by with a trip to the museum.. ad to maintain the image in front of the children.  I need new chairs for the studio but I think I'll take a trip by MYSELF this fall.  Roadtrip anyone?

So class today?  We are having my October Framelits classes again tomorrow morning and tomorrow evening and I would certainly have room for you  Email me!    Here's one of my Framelits class today.  It was inspired by a card by Andrea Walford. 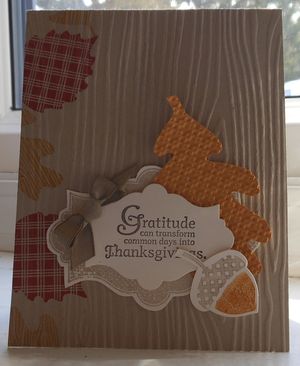 I wonder if I should have had another layer of Crumb Cake behind the embossed layer.  What do you think?  Is this a case of less is more?  Sometimes I just need to "STEP AWAY FROM THE CARD!"