When it rains….it pours.  Not literally over here, but figuratively!  Since many of you have been asking how Adria is doing, I'll do that first.  She tore her ACL in a soccer game in April and basically, as soon as the Stampin' Up! Disney vacation was done, she had surgery to repair the ACL.  It was the patellar tendon graft so it's a pretty intense surgery.  She's on crutches for a total 4 weeks and then physical therapy for about 6 months and the end result is hopefully a return to sports in October.  For the first week I was Nurse Nancy and I can say I'm pretty sure that you nurses don't get paid enough.  The we moved on to Debbie Driver as it's Dr appts & Physical Therapy 3x per week and I'm pretty sure that Rob could have found a PT closer than Brookfield.  Then it's been Rosalie the Referree this week as we are dealing with a frustated 15 year old that has too much time and energy on her hands and desperately wants to be on that field instead of watching and so she's picking fights with ANYTHING that moves, specifically her 5 year old sister that is more than willing to fight back….aaaargh.  I'm also pretty sure that one of the three of us will lose our mind…..I have an inkling as to which it will be. Let me give you a hint….my computer crashed this past week!

So I'm desperately needing the zen of the stamping studio and have found that I need the stamping therapy!  I love to escape out here to our "happy place" as so many of you call it.  I think I get why you LOVE to come here, despite the messy desks and happy chaos that this room provides.  It's Sanity Saving.

So on a sunnier note, I HAVE catalogs!  I know, you are desperately waiting for them and I've got one here SAVED for you…..Swing by anytime and pick it up.  I'm finalizing details on my Catalog Kickoff and Annual Tour de Catalog.  Bear with me and just know, you can come out anytime and pick up YOUR copy.  It's yours for the ASKING….

So how about a card?  This is a card with one of my very favorite stamp sets…Charming.  It's retiring in a couple of days so you MUST order it NOW..  It's so dainty and delicate…JUST like my Charming, 15 year old frustrated soccer player.  So feminine and pretty.  :)  All for today.  I've got to get that LONG OVERDUE May newsletter out! 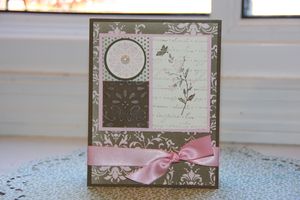 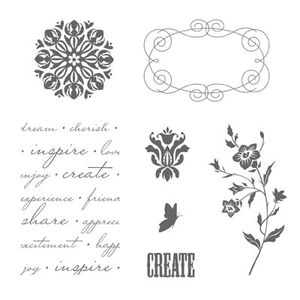