Ok, imagine that you are me.  You've cut cardstock for a class and padded the count so that you can cover mistakes, last minute additions, and anyone you've FORGOTTEN to write down on the roster.  Then class day arrives, amidst winter and the flu season and you've got a couple of cancellations ON TOP of the already padded number and thus, you are left with quite a bit of precut cardstock.

What do you do?  You do like any slightly obsessive, Type B driven person would do, aka yours truly, you stash it in a cupboard, because it's probably against your religion to put precut cardstock that has been given a purpose, BACK into the scrap drawer.  You must set it aside to complete at a later day.  Of course, just when that would be….one never knows and rarely does that day arrive.  So I've got stacks of precut paper just lying around.  I've been known to give it to my customers.  They can either put it back in the drawers when I'm not looking or take it home and put it in their cupboards, whatever, not my issue any more at that point.  But just like zucchini, my customers are finding way to duck their heads when I announce on occasion, "Anyone want any cardstock?"  Hence the need for Fugue Friday!

Back when I took piano lessons, I thought I learned that a fugue was a sort of a variation on a theme.  So I googled "definition of a fugue" just to be sure.   I had to giggle when the definition popped up.

You can take Fugue Friday in whatever form you want it to be.  I'm pretty sure this can fall under any of the three meanings..I'm going to state that while not a musical form, we've got variations on a theme.  I've taken the extra cardstock from this class sample and created three different cards, simply by varying stamp sets, embellishments and in once case, cardstock color. 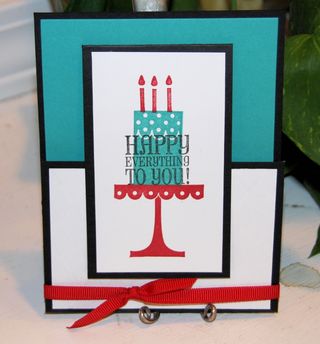 Simple change of the stamp set and embellishment placement and used a texture plate in lieu of an embossing folder. 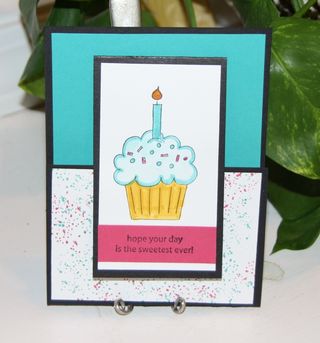 Again, changed the stamps used, changed the texture plate for a "texture" stamp set and instead of ribbon, used a piece of cardstock as a place for a greeting. 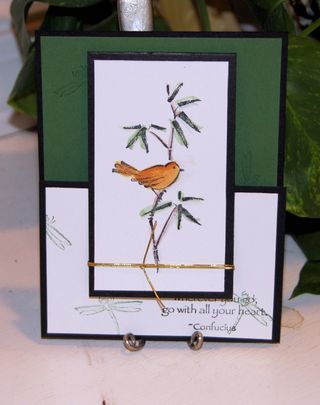 Changed out the background cs as Bermuda was too hip for me.  Stamped dragon flies on the bottom panel and watercolored my bird.  Wrapped with gold cording instead of ribbon.

Well, that's all for this Friday.  My pile of extra cardstock is used up.  I needed several attempts at watercoloring  so I had to keep stealing from the next pre-cut envelope in the stack.  And if a piece or layer is missing from the pre-cut envelope, then my quirky inner voice will give permission to return the rest of envelope contents to the scrap bins.  Go figure, I can't!