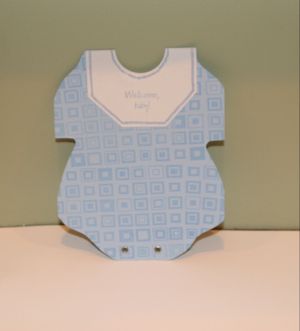 This was a swap card I received at convention this past year from Ginger Prestwich, a demo from somewhere in North America.  Isn’t it adorable.

When I say "it was a swap card from convention…"  Here’s what I mean.  It’s the yearly convention that Stampin’ Up! hosts for us demos.  Image a couple of thousand stamp crazy woman.  Put them in a big convention center and add lots of stamps, inks and enthusiasm.  While it’s business and demonstration geared, there are a lot of "swaps"  Meaning, I’d have made about 300 cards at home, usually about 6-8 styles and then you go around "swapping" with other demos that have done the same.  Loads and loads of fun.